ATLANTA, July 13, 2018 (Newswire.com) - OrthoAtlanta is proud to serve as the official orthopedic and sports medicine provider of the 2018 BB&T Atlanta Open, an ATP World Tour 250 event that runs July 21 – 29 in Atlantic Station, in Midtown Atlanta, Georgia. Welcoming over 330,000 tennis fans to Atlantic Station over the past eight years, the nine-day event is a mix of young upstarts and former and current ATP World Tour top-20 players. The BB&T Atlanta Open is one of eight summer tournaments in the U.S. Open Series, and features top ATP World Tour players in singles and doubles competition. An exhibition match billed as the 2017 US Open Women’s Rematch pairs Sloane Stephens vs. Madison Keys.

As the official orthopedic and sports medicine provider of the BB&T Atlanta Open, OrthoAtlanta physicians serve as the key medical point of contact for the visiting players, coaches and officials during the tournament. Serving as co-Medical Directors of the 2018 BB&T Atlanta Open are OrthoAtlanta orthopedic surgeons, Snehal C. Dalal, MD, and Joseph S. Wilkes, MD. Orthopedic services that are provided by OrthoAtlanta include physical therapy, examinations, non-operative treatments, consultation with the athletes and their coaching staff and referral to outside specialists when necessary.

Throughout the BB&T Atlanta Open tournament, the players, coaches and officials rely on OrthoAtlanta to provide superior sports medicine care and service.

“The BB&T Atlanta Open brings world-class tennis and world-class athletes to Atlanta each year for nine non-stop days,” said Eddie Gonzalez, Tournament Director. “This requires the support of world-class partners, including OrthoAtlanta. The physicians and staff of OrthoAtlanta have provided us with expert orthopedic and sports medicine care to the players, their families, and tournament staff for the past nine years.”

"Throughout the tournament, the players, coaches and officials rely on OrthoAtlanta to provide superior sports medicine care and service,” stated OrthoAtlanta orthopedic surgeon, Snehal C. Dalal, MD, a specialist in hand and upper extremity surgery and co-Medical Director of this year’s BB&T Atlanta Open, Dr. Dalal treats hundreds of tennis players in his practice each year; he understands and shares in the excitement that this world championship tennis event generates in Atlanta.

OrthoAtlanta orthopedic surgeon, Joseph S. Wilkes, MD, fellowship trained in sports medicine and hand surgery also serves as co-Medical Director for the BB&T Atlanta Open. Dr. Wilkes said, “OrthoAtlanta is actively involved in the medical operations planning and staffing plan for the BB&T Atlanta Open starting in early spring. When the tournament starts in late July, OrthoAtlanta provides training room set-up, medical staffing, injury evaluations and treatment throughout the event.” Dr. Wilkes continued, “Together with the ATP Physiotherapists, OrthoAtlanta physicians can provide follow-up treatments for the athletes when they arrive here, and we will enter new illnesses and injuries sustained in Atlanta into the ATP’s electronic medical record for subsequent medical teams to use after they leave, providing unprecedented continuity of care to the athletes.” Dr. Wilkes has served as Chief Tournament Physician for the BB&T Atlanta Open and the previous Atlanta Tennis Challenge ATP event. His expertise in serving international sports events includes the 1996 Atlanta Olympic Games when Dr. Wilkes served as the Coordinator of Venue Medical Directors.

OrthoAtlanta shares the excitement of world-class tennis with the Atlanta community in the weeks leading up to the tournament and throughout tournament week. A tournament favorite, the Ball Toss presented by OrthoAtlanta is held on Friday night. Ticket holders lob over 2,000 yellow tennis ball squeeze balls onto the court for a chance to win a $1,000 gift card.

Join OrthoAtlanta at the 2018 BB&T Atlanta Open for an action-packed 9-days of top tournament tennis and fun!

About the BB&T Atlanta Open
The BB&T Atlanta Open is held each year in July in Atlantic Station and is one of eight summer tournaments in the U.S. Open Series. The tournament features men’s top world tennis players in singles and doubles competition. Approximately 40,000 fans attend the tournament and bring an estimated economic impact of $10.3 million to Atlanta. John Isner has won the 2017, 2015, 2014 and 2013 singles titles. Other notable champions include Andy Roddick, who won his last ATP World Tour title when he defeated Gilles Muller at the 2012 BB&T Atlanta Open, Mardy Fish who holds the singles title for 2011 and 2010, and Australian Nick Kyrgios, who won in 2016.

About the U.S. Open Series
Now in its 15th season, the world's best players on the WTA and ATP World Tour are coming together for the U.S. Open Series. Linking seven summer WTA and ATP World Tour tournaments to the U.S. Open, the U.S. Open Series serves as a true regular season of hard court tennis. Featuring a cohesive schedule, the series centralizes the way tennis is viewed in North America across multiple television and digital platforms. Fans will see today's top champions go head-to-head with tomorrow's emerging stars, as storylines develop throughout the summer season. Each tournament also engages its local community with a variety of outreach initiatives, including grassroots youth tennis clinics and activities.

About GF Sports
GF Sports is a sports and entertainment content company based in New York, NY. The company owns and operates several professional tennis and ice skating events, each with a rich tradition and longstanding role in their respective sports. GF Sports events included: The BNP Paribas Showdown (New York, NY), The New York Open, The BB&T Atlanta Open (Atlanta, GA), and Nancy Kerrigan's Halloween On Ice Tour. Throughout their storied histories, these events have hosted hundreds of thousands of fans, celebrities, sponsor guests, and some of the most iconic names in sports, all while generating significant exposure through multiple social, digital and TV platforms. In addition to its current properties, GF Sports is in development on several other exciting and innovative sporting events.

About the ATP
The ATP is the governing body of the men's professional tennis circuits - the ATP World Tour, the ATP Challenger Tour, and the ATP Champions Tour. With 64 tournaments in 31 countries, the ATP World Tour showcases the finest male athletes competing in the world’s most exciting venues. From Australia to Europe and the Americas to Asia, the stars of the 2018 ATP World Tour will battle for prestigious titles and ATP ranking points at ATP World Tour Masters 1000, 500 and 250 events, as well as Grand Slams (non-ATP events). At the end of the season, only the world’s top eight qualified singles players and doubles teams will qualify to compete for the last title of the season at the Nitto ATP Finals. Held at The O2 in London, the event will officially crown the 2018 ATP World Tour No. 1. For more information, please visit www.ATPWorldTour.com. 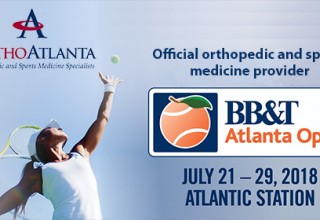