ATLANTA, April 20, 2018 (Newswire.com) - When the Atlanta Gladiators, formerly known as the Gwinnett Gladiators, relocated from Mobile, AL in 2002, OrthoAtlanta orthopedic and sports medicine specialists stepped onto the ice to extend a neighborly hello. Fifteen years later, both organizations are proud to say that the partnership continues to be a success!

The Atlanta Gladiators professional hockey team is celebrating its 15th Anniversary Season in 2017-2018. The team concluded regular season play in early April by advancing into the South Division 2018 Kelly Cup Playoffs, their first post-season appearance since the 2012-13 season. The best-of-seven playoff started April 16 vs. the Florida Everblades. The 2017-18 season marked the 15th year of Gladiators hockey, today played in Duluth, GA at the Infinite Energy Center. The Gladiator organization has built a strong reputation as a long-standing and successful member club in the ECHL, the nation’s premier "AA" hockey league.

OrthoAtlanta is proud to serve the Atlanta Gladiators for 15 years. We've greatly enjoyed participating in the growth of the Gladiators organization, and look forward to continuing this partnership for many years to come.

OrthoAtlanta is recognized by the Atlanta Gladiators as its longest-running sponsor partner. Taking a few moments for an on-ice photo with OrthoAtlanta’s Dr. Brian Morgan, Atlanta Gladiators team president, Scott Henrichsen, said, “Celebration of our 15th Anniversary allows us to reflect on the advances made by the team during its first 15 years, and look ahead to the future with valued partners. OrthoAtlanta physicians provide expert orthopedic and sports medicine care to our players, coaches and staff who give it their all on the ice at every game.”

As stated by Brian E. Morgan, M.D., “OrthoAtlanta is proud to serve the Atlanta Gladiators for 15 years. We’ve greatly enjoyed participating in the growth of the Gladiators organization, and look forward to continuing this partnership for many years to come.”

OrthoAtlanta has grown in 15 years, too. Today, OrthoAtlanta has 38 physicians and over 450 employees serving patients in 14 locations across the greater Atlanta metropolitan area, including locations in Gwinnett and Johns Creek, that directly serve the sports medicine needs of the team.

While OrthoAtlanta physicians support the players on the ice, OrthoAtlanta has brought the excitement of professional hockey to its patients, staff, and residents across the Atlanta metro area. Events throughout the 15 years have included OrthoAtlanta Night at the Gladiators, OrthoAtlanta Thunder Stix Nights, Online Ticket Sweepstakes offers, and much more. Maximus D. Lion, the Gladiators venerable mascot, has made several guest appearances at OrthoAtlanta offices to the delight of patients and staff, alike.

Atlanta Gladiators
The Gladiators are members of the ECHL, the nation’s premier "AA" hockey league. All home games are played at the 10,867-seat Infinite Energy Arena, located just off I-85 on Sugarloaf Parkway in Duluth – where parking is always free. The Gladiators have established an unrivaled commitment to excellence, maintaining a distinctive reputation for affordable and family-friendly sports entertainment and consistently ranked as one of the top “Things To Do” in the Atlanta area and across the North Georgia region.
Learn more at www.AtlantaGladiators.com 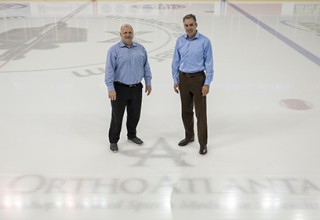