Atlanta, GA, August 10, 2017 (Newswire.com) - OrthoAtlanta is proud to serve as the official orthopedic and sports medicine provider to the 2017 Chick-fil-A Kickoff Games, a role it has held since the inaugural 2008 game.  Matching top college football teams in a neutral-site setting, the Chick-fil-A Kickoff Game is the nation’s longest running kick-off game and has been nationally televised on the opening weekend of the college football season since its inception. The Chick-fil-A Kickoff Game boasts an average attendance of 67,645 and has been watched on television by 47.4 million viewers. This year, the sold-out games will be the first college football games played in the new, state-of-the-art Mercedes-Benz Stadium. The Saturday, September 2 game pairs the Florida State Seminoles against the Alabama Crimson Tide. The Monday, September 4, Labor Day game matches the University of Tennessee Volunteers against the Georgia Tech Yellow Jackets.

OrthoAtlanta provides on-site orthopedic medical services throughout the Chick-fil-A Kickoff Games to the team players, their coaches, staff and officials.

ABOUT THE CHICK-FIL-A KICKOFF GAME
Created in 2008 by Peach Bowl, Inc., the Chick-fil-A Kickoff Game is the preeminent bowl-style, neutral-site game featuring two elite football programs and has been nationally televised on the first Saturday of the college football season since its inception. The game has hosted teams with national rankings of No. 1, 2, 5 (twice), 6, 7, 9, 14, 16, 18 (twice), 19, 22, 24 (twice) and 25 (twice). The Chick-fil-A Kickoff Game boasts an average attendance of 67,645, has been watched on television by 47.4 million viewers and has distributed $51.9 million in total team payouts. Since its inception in 2008, the Chick-fil-A Kickoff game has featured seven national coaches of the year, 19 players who were recipients of national awards during their collegiate careers and a total of 48 first-round NFL Draft picks. For more information, visit WWW.CHICK-FIL-AKICKOFFGAME.COM. 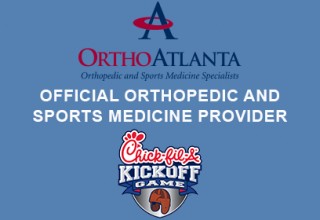